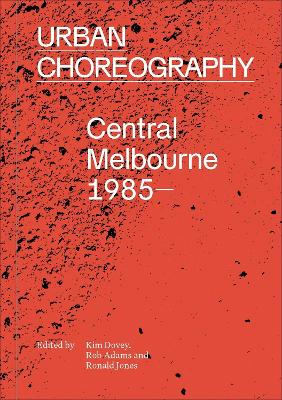 The global success story of central Melbourne's transformation since the 1980s

The transformation of central Melbourne since the since the 1980s is a global success story-or rather, many success stories. Public space has been incrementally reclaimed from cars and railyards, and street-life volumes have increased dramatically. From turning its back on the water, Melbourne has become a waterfront city. The decline of central city retailing has been turned around and the formerly negligible residential population is booming. The city has grown grown greener-literally, environmentally and politically. Laneways that were once filled with garbage are now filled with bars, housing and art. Always an urbane place, Melbourne has re-emerged as a city with a depth of character and urban buzz that is palpable, ineffable and unfinished.
Urban Choreography- Melbourne 1985- documents and critiques the range of urban design transformations over this period, together with the key events, plans, projects, places and people involved. It seeks to understand the intermeshing of social, economic, political, environmental and aesthetic forces that drove and constrained these changes, and concludes by looking forward to the possibilities for another thirty years of change. 'Urban Choreography' invokes the idea that the shaping of these multiple movements could create chaos, but can be guided to work in synergy.

A Preview for this title is currently not available.
More Books By Kim Dovey
View All