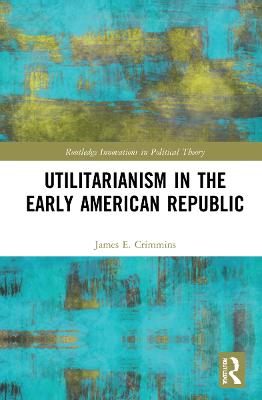 Utilitarianism in the Early American Republic

In Utilitarianism in the Early American Republic James E. Crimmins provides a fresh perspective on the history of antebellum American political thought.

Based on a broad-ranging study of the dissemination and reception of utilitarian ideas in the areas of constitutional politics, law education, law reform, moral theory and political economy, Crimmins illustrates the complexities of the place of utilitarianism in the intellectual ferment of the times, in both its secular and religious forms, intersection with other doctrines, and practical outcomes. The pragmatic character of American political thought revealed-culminating in the postbellum rise of Pragmatism-stands in marked contrast to the conventional interpretations of intellectual history in this period.

Utilitarianism in the Early American Republic will be of interest to academic specialists, and graduate and senior undergraduate students engaged in the history of political thought, moral philosophy and legal philosophy, particularly scholars with interests in utilitarianism, the trans-Atlantic transfer of ideas, the American political tradition and modern American intellectual history.

A Preview for this title is currently not available.
More Books By James E. Crimmins
View All