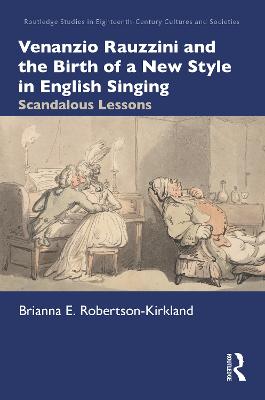 Venanzio Rauzzini and the Birth of a New Style in English Singing: Scandalous Lessons

Description - Venanzio Rauzzini and the Birth of a New Style in English Singing: Scandalous Lessons by Brianna E. Robertson-Kirkland

Since the eighteenth century, the one-to-one singing lesson has been the most common method of delivery. The scenario allows the teacher to familiarise and individualise the lesson to suit the needs of their student; however, it can also lead to speculation about what is taught. More troubling is the heightened risk of gossip and rumour with the private space generating speculation about the student-teacher relationship. Venanzio Rauzzini (1746-1810), an Italian castrato living in England who became a highly sought-after singing master, was particularly susceptible since his students tended to be women, whose moral character was under more scrutiny than their male counterparts. Even so in 1792, The Bath Chronicle proclaimed the Italian castrato: 'the father of a new style in English singing'. Branding Rauzzini as a founder of an English style was not an error, but indicative of deep-seated anxieties about the Italian invasion on England's musical culture. This book places teaching at the centre of the socio-historical narrative and provides unique insight into musical culture. Using a microhistory approach, this study is the first to focus in on the impact of teaching and casts new light on issues of celebrity culture, gender and nationalism in Georgian England.