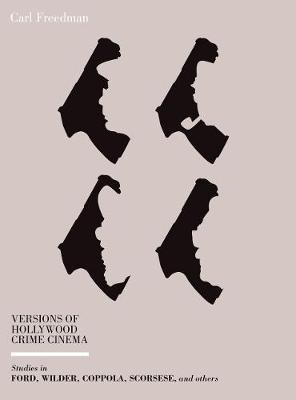 Studies in Ford, Wilder, Coppola, Scorsese, and Others

No society is without crime, prompting Nathaniel Hawthorne's narrator to make his famous statement in The Scarlet Letter that, however high its hopes are, no civilization can fail to allot a portion of its soil as the site of a prison. Crime has also been a prevailing, common theme in films that call us to consider its construction: How do we determine what is lawful and what is criminal? And how, in turn, does this often hypocritical distinction determine society?

Film, argues Carl Freedman, is an especially fruitful medium for considering questions like these. With Versions of Hollywood Crime Cinema, he offers a series of critical readings spanning several genres. From among the mob movies, Freedman focuses on Francis Ford Coppola's Godfather trilogy-arguably the foremost work of crime cinema-crafting a convincing argument that the plot's action is principally driven by the shift from Sicily to America, which marks the shift to a capitalist society. Turning his attention to other genres, Freedman also looks at film noir and Westerns, in addition to films for which crime is significant but not central, from horror movies like Stanley Kubrick's The Shining to science fiction and social realist films like The Grapes of Wrath. In recent years, television has welcomed innovative works like Boardwalk Empire, The Wire, and The Sopranos, and Freedman discusses how television's increasingly congenial creative environment has allowed it to turn out productions whose ability to engage with these larger social questions rivals that of films from the height of cinema's Golden Age.

A Preview for this title is currently not available.
More Books By Carl Freedman
View All