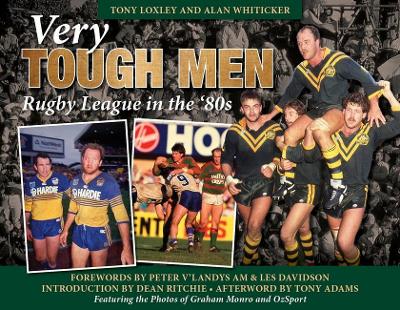 Following on from the success for the epic 400-page hard-bound League on Sunday - Work on Monday - Memories of Rugby Leagues Last Golden Era, 1965-1995, Full Throttle Publishing are launching their newest rugby league title, Very Tough Men - Rugby League in the 80s. This epic 298-page, lavishly illustrated volume, co-authored by Tony Loxley and Alan Whiticker, the perfect present available in time for Fathers Day and Christmas! Illustrated with over 1000 stunning, and at times hard-hitting colour and black and white images, and many items of memorabilia, this superb publication also features many first person memories from those who not only played the game, but officiated and covered the sport throughout the decade of the 1980s. Players such as Mark Graham (North Sydney/New Zealand), Allan Fallah (Western Suburbs), Bruce "Bruiser" Clark and Brett Clark (Western Suburbs), Marty Gurr (Manly/Eastern Suburbs), Les Davidson (South Sydney and Australia) and many more have contributed their memories alongside leading journos Peter Peters, Dean Ritchie and Tony Adams. Leading 1980s referee Greg McCallum has also contributed so has former Easts player and Eastern Suburbs and Parramatta CEO, Bernie Gurr . Coaches such as Steve Ghosn and Arthur Katinas have also contributed. With a Foreword by Peter Vlandys AM (Chairman of the NRL) and Les Davidson, this epic work is a volume that is the perfect follow-up for League on Sunday, Work on Monday and a book not to be missed. With a special tribute to the late great Tommy Raudonikis.

A Preview for this title is currently not available.
More Books By Tony Loxley
View All