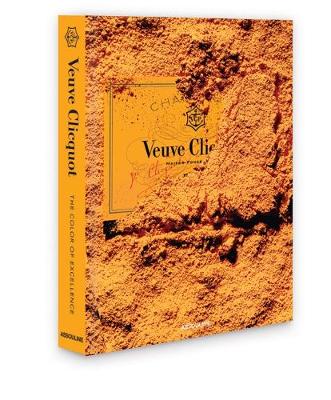 Veuve Clicquot Ponsardin has been pushing boundaries for the past 250 years. From inventing rose champagne in 1775 to collaborating with innovators such as Andree Putman and the Campana Brothers, with each passing century the legendary label goes above and beyond to challenge itself with new initiatives to energise and excite its enthusiasts. When Madame Clicquot, who had become the veuve (widow) Clicquot Ponsardin, inherited the house in 1805, she followed the motto "Only one quality, the finest" and created the first vintage and the riddling rack, two major innovations for champagne production. Centuries later, the brand behind the characteristic yellow label continues to make history, going beyond champagne to represent a complete lifestyle. In 2010, Veuve Clicquot's home base in Reims reopened after an extensive four-year renovation by interior designer Bruno Moinard. Contemporary works by Yayoi Kusama, Karen Knorr, and Pablo Reinoso now adorn the eighteenth-century wood paneling at the Hotel du Marc - a perfect combination of design, art, and gastronomy that acts as a center for sharing and spreading the wealth of a magnificent wine. Veuve Clicquot is the drink of choice in spring at Goodwood Circuit in the United Kingdom, in summer on the polo lawns of New York, and in winter on Carnival chariots in Rio. In 2013, Veuve Clicquot partnered with Michelin-starred chef Joel Robuchon, securing its wines a spot as the guest of honour in each of his twenty-three restaurants. The following year, a collaboration with Ferrari brought the limited-edition Veuve Clicquot Maranello collection. The house has also been active in the sustainability movement, reducing emissions at the Hotel du Marc, as well as introducing "Naturally Clicquot" eco-friendly packaging, made from the pulp of grapes harvested from the most prestigious hills of the Champagne region - a global first. Between tradition and jet set, excellence and attitude, over the years the house has perfected the way of life "a la Clicquot," a life synonymous with fine, authentic products and classic culture. AUTHORS: French journalist Sixtine Dubly has interviewed the greatest artists, designers, and creative stars of the international scene for the last fifteen years. Wherever she travels, she tracks emerging trends and handpicks talents, keeping in touch with modern design and lifestyle around the world. She has contributed to Architectural Digest, Ideat Magazine, Marie Claire Maison, and Le Nouvel Observateur, among others, and currently writes for the lifestyle section of Paris Match magazine, where she covers design. She is also the author of Flowers: Art & Bouquets and Orient Express, published by Assouline in 2016. Mireille Guiliano is the internationally best-selling author of French Women Don't Get Fat: The Secret of Eating for Pleasure and its sequels. She was a longtime spokesperson for Veuve Clicquot and former president and CEO of Clicquot, Inc. (Veuve Clicquot's USA subsidiary). She has appeared on Oprah, The Today Show, and various other national broadcasts, and has been profiled in The New York Times, USA Today, Time, Newsweek, People, Business Week, More, Travel & Leisure, and Food & Wine. Guiliano contributes articles on food, wine, travel, and lifestyle to a wide range of publications. 150 illustrations

A Preview for this title is currently not available.
More Books By Sixtine Dubly
View All