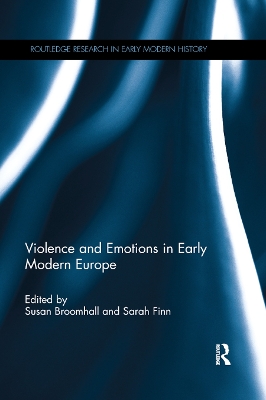 Violence and Emotions in Early Modern Europe examines the purposes for which specific forms of violence and particular emotional states functioned, how they operated in relation to each other, or indeed how one provoked, sustained or diminished the other.

These twelve original essays demonstrate the complexities of violence and emotions and the myriad possibilities of their inter-relationships. They emphasize the great efforts that were made by early modern societies to control modes of violence and emotional regimes to achieve positive as well as negative effects, such as creating order, healing, and bringing individuals and communities together around productive identities.

Authors consider legal documents, news reports, memoirs, letters, confraternity statutes, and medical consultations to investigate the bodily and textual practices in which violent and emotional acts were created, supported and disseminated to investigate the power, aims, effect and outcomes of relationships between violence and emotions. The chapters look at a range of topics and countries including Renaissance Italy and sixteenth-century Germany, France in the grip of the religious wars, and England's Civil Wars as well as a wide range of topics including murder, punishment, community healing, insults, threats, prophecy and medical and devotional practices.

This collection will be essential reading for students and scholars of the history of emotions or violence. A Preview for this title is currently not available.
More Books By Susan Broomhall
View All