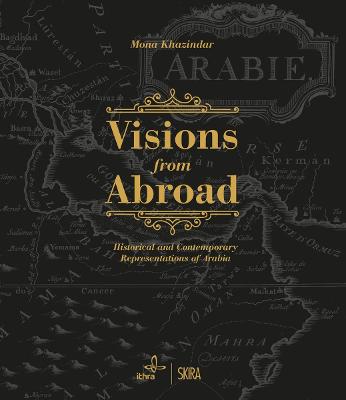 Visions from Abroad: Historical and Contemporary Representations of Arabia

Description - Visions from Abroad: Historical and Contemporary Representations of Arabia by Mona Khazindar

Arabia was certainly the most mysterious country in the world during the historical era, an impenetrable and unknowable realm capable of stimulating the imagination and indeed the wildest fancies of the European intellectual elite. While the Hejaz region, where the two holy cities of Islamic Mecca and Medina are located, is still simply off-limits to non-Moslems, the rest of this vast land was at least as inaccessible and dangerous with its terrible deserts populated by Bedouins, whose reputation was enough to discourage the most fearless traveller.

A small handful did, however, risk their lives to journey through Arabia and return with the rare texts and images that form the subject of this publication. These works, or rather the most captivating and successful of them in historical, anthropological and aesthetic terms, are gathered together in Visions from Abroad. Historical and Contemporary Representations of Saudi Arabia and presented in a dozen thematic chapters. All the media and all the genres, including painting, sculpture, engraving and photography as well as installation and even comics, are represented in this extraordinary gallery of images, where the works of great orientalist artists like Leon Belly, Georg Emanuel Opiz and Emile Prisse d'Avesnes are fruitfully juxtaposed with those of famous contemporary photographers like Raymond Depardon, Abbas and Humberto Da Silveira.

Running parallel to these images, the text enables us to see through Arabia, a land so difficult and complex to penetrate and decipher, through the eyes of the travellers who undertook to describe it in the works they have left to posterity. It also addresses the often uncommon personalities of these figures, like the Italian Ludovico di Varthema from Bologna, who did not hesitate to become a Mamluk in 1503 in order to set foot on Arabian soil, and the British naval officer and writer Richard Burton, who managed to pass himself off as an Afghan physician and magician to the same end in 1853.

A Preview for this title is currently not available.
More Books By Mona Khazindar
View All