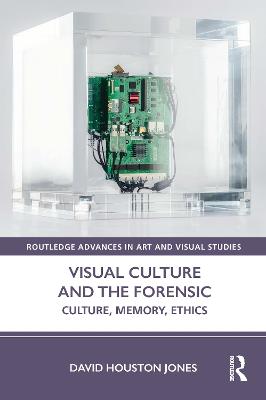 David Houston Jones builds a bridge between practices conventionally understood as forensic, such as crime scene investigation, and the broader field of activity which the forensic now designates, for example in performance and installation art as well as photography.

Contemporary work in these areas responds both to forensic evidence, including crime scene photography, and to some of the assumptions underpinning its consumption. It asks how we look, and in whose name, foregrounding and scrutinising the enduring presence of voyeurism in visual media and instituting new forms of ethical engagement. Such work responds to the object-oriented culture associated with the forensic and offers a reassessment of the relationship of human voice and material evidence. It displays an enduring debt to the discursive model of testimony which has so far been insufficiently recognised, and which forms the basis for a new ethical understanding of the forensic. Jones's analysis brings this methodology to bear upon a strand of contemporary visual activity that has the power to significantly redefine our understandings of the production, analysis and deployment of evidence. Artists examined include Forensic Architecture, Simon Norfolk, Melanie Pullen, Angela Strassheim, John Gerrard, Julian Charriere, Trevor Paglen, Laura Poitras and Sophie Ristelhueber.

The book will be of interest to scholars working in art history, visual culture, literary studies, modern languages, photography and critical theory.

A Preview for this title is currently not available.
More Books By David Houston Jones
View All