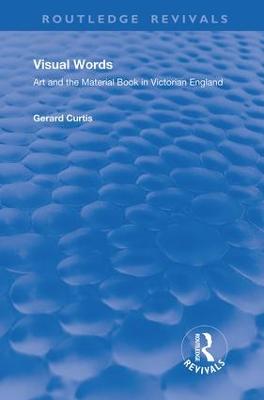 Visual Words: Art and the Material Book in Victorian England

First Published in 2002, Visual Words provides a unique and interdisciplinary evaluation of the relationship between images and words in this period.Victorian England witnessed a remarkable growth in literacy culminating in the new literary nationalism that emerged at the beginning of the twentieth century. Each chapter explores a different aspect of this relationship: the role of Dickens as the heroic author, the book as an iconic object, the growing graphic presence of the text, the role of the graphic trace, the 'Sister Arts/ pen and pencil' tradition, and the competition between image and word as systems of communication. Examining the impact of such diverse areas as advertising, graphic illustration, narrative painting, frontispiece portraits, bibliomania, and the merchandising of literary culture, Visual Words shows that the influence of the 'Sister Arts' tradition was more widespread and complex than has previously been considered. Whether discussing portraits of authors, the uses of iconography in Ford Madox Brown's painting Work, or examining why the British Library was equipped with false bookcases for doors, Gerard Curtis looks at artistic and literary culture from an art historical and 'object' perspective to gain a better understanding of why some Victorians called their culture 'hieroglyphic'.

Other Editions - Visual Words: Art and the Material Book in Victorian England by Gerard Curtis A Preview for this title is currently not available.
More Books By Gerard Curtis
View All