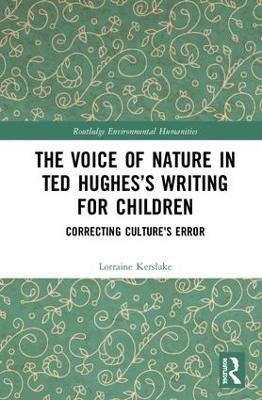 The Voice of Nature in Ted Hughes's Writing for Children

Despite the fame Ted Hughes's poetry has achieved, there has been surprisingly little critical writing on his children's literature.

This book identifies the importance of Hughes's children's writing from an ecocritical perspective and argues that the healing function that Hughes ascribes to nature in his children's literature is closely linked to the development of his own sense of environmental responsibility. This book will be the first sustained examination of Hughes's greening in relation to his writing for children, providing a detailed reading of Hughes's children's literature through his poetry, prose and drama as well as his critical essays and letters. In addition, it also explores how Hughes's children's writing is a window to the poet's own emotional struggles, as well as his environmental consciousness and concern to reconnect a society that has become alienated from nature.

This book will be of great interest to not only those studying Ted Hughes, but also students and scholars of environment and literature, ecocriticism, children's literature and twentieth-century literature.

Buy The Voice of Nature in Ted Hughes's Writing for Children by Lorraine Kerslake from Australia's Online Independent Bookstore, BooksDirect.