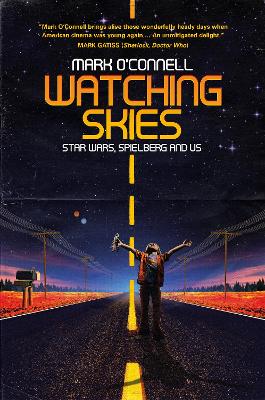 A unique and timely memoir, full of '80s nostalgia, that explores the golden age of Hollywood cinema. With 2017 marking the 40th anniversary of both Star Wars and Close Encounters of the Third Kind, as well as the release of the highly anticipated Star Wars: The Last Jedi, Watching Skies is a timely, personal and sharply observed reappraisal of the wave of late 70s/early 80s Hollywood movies that redefined the movie-going experience for Mark O'Connell and his generation of young cinephiles. From the untold magic (and fear) of an uncle's VHS recording of Close Encounters of The Third Kind to childhood crushes on Christopher Reeve, bedroom remakes of Return of The Jedi, meeting Darth Vader in a department store, the profound trauma of losing every Star Wars figure on the island of Crete, and the terror of watching Poltergeist way too young, Watching Skies is about how Hollywood helped a kid from the frozen planet of Britain come to terms with a broken home and a lack of siblings, and how that 1980s Californian galaxy of BMX bikes, MandMs, Atari arcade games and a backyard full of Star Wars toys was ultimately just too far, far away?... AUTHOR: Mark O'Connell is the author of Catching Bullets: Memoirs of a Bond Fan, which was shortlisted for the 2013 Polari First Book Prize. SELLING POINTS: The Force Awakens has introduced Star Wars to a new generation of fans Stranger Things has brought '80s nostalgia back in a big way Amidst the plethora of official guides, spin-off fictions and tie-in publications, this is the first Britishskewed look at those films and their cinematic siblings 20 colour images

A Preview for this title is currently not available.
More Books By Mark O'Connell
View All