One Soldier's Story of Brutal Combat

Description - We Were Warriors by Johnny Mercer

A captain in 29 Commando, Johnny Mercer completed three tours of Afghanistan, the final one as the conflict reached a bloody climax in 2010. That summer, in the hotly contested area of northern Nad-E Ali, he experienced some of the heaviest fighting of the war. He was a Joint Fires Controller who went out on patrol twice a day for 7 months, knowing that in an ambush or brutal close quarter combat, his ability to bring down devastating strikes from artillery or the air could make the difference between life and death.

In We Were Warriors he takes us from his commando training to the heat, blood and chaos of battle. With brutal honesty, he describes what it is like to risk your life every day, pushing through the fear that follows watching your friends getting injured and killed. His friend and closest soldier was shot dead next to him, he was left behind on patrol and targeted by the Taliban, and yet he continued to take the fight back to the enemy with a relentless efficiency that came at a high personal cost.

Deeply affected by the inadequate care available for veterans and their families in the United Kingdom, he was inspired to run for Parliament in the hope he could improve their plight. Against all the odds, he was elected as MP of Plymouth Moor View on 7 May 2015 and on 1 June he used his maiden speech to lay bare the sacrifice and commitment of his generation of warriors. Unflinching, passionate and laced with wry humour, We Were Warriors is a compelling read.

Buy We Were Warriors by Johnny Mercer from Australia's Online Independent Bookstore, BooksDirect.

Other Editions - We Were Warriors by Johnny Mercer 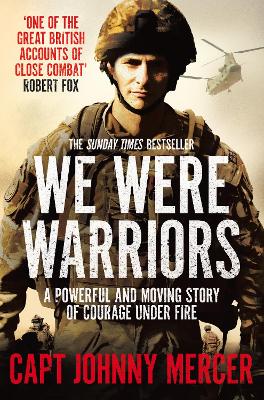 A Preview for this title is currently not available.
More Books By Johnny Mercer
View All