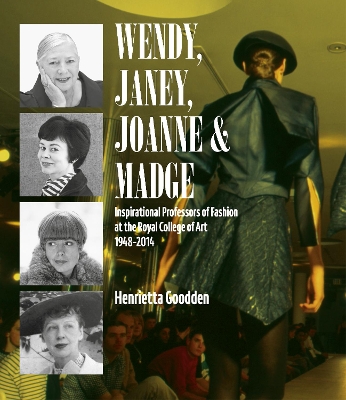 Wendy, Janey, Joanne and Madge: Inspirational Professors of Fashion at the Royal College of Art 1948-2014

Description - Wendy, Janey, Joanne and Madge: Inspirational Professors of Fashion at the Royal College of Art 1948-2014 by Henrietta Goodden

Madge Garland, Janey Ironside, Joanne Brogden and Wendy Dagworthy, a quartet of remarkable educators and doyennes of style and skill, encouraged their students with rigorous determination to produce nothing but the best. Garland, previously Fashion
Editor of Vogue magazine and a brave pioneer when the educational establishment regarded fashion as 'frippery', laid foundations on which Ironside, the sparkling innovator built. Then Brogden took the School into a more competitive commercial world with fashion becoming a major economic force. When Dagworthy took over in the final decade of the 20th century, she guided her students into a new era while still respecting the inheritance of her predecessors.


Today's markets demand high-fashion-ready-to-wear, with the RCA School of Fashion's reputation second to none for innovation in design and manufacturing techniques, and its alumni now in positions of influence throughout the world. From retail and industrial connections forged in the 1950s, RCA designers such as Ossie Clark and Zandra Rhodes, established their reputations, and top world-wide brands including Kenzo, Givenchy, Gucci , Louis Vuitton and Calvin Klein, clamoured to employ star RCA students.

A Preview for this title is currently not available.
More Books By Henrietta Goodden
View All