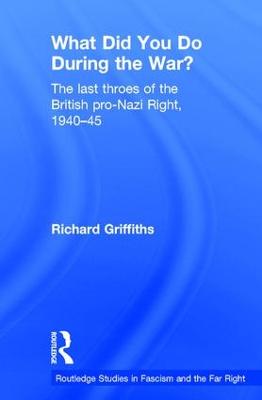 What Did You Do During the War?

Description - What Did You Do During the War? by Richard Griffiths

This book is a sequel to Richard Griffiths's two highly successful previous books on the British pro-Nazi Right, Fellow Travellers of the Right: British Enthusiasts for Nazi Germany 1933-39 and Patriotism Perverted: Captain Ramsay, the Right Club and British Anti-Semitism 1939-1940. It follows the fortunes of his protagonists after the arrests of May-June 1940, and charts their very varied reactions to the failure of their cause, while also looking at the possible reasons for the Government's failure to detain prominent pro-Nazis from the higher strata of society.

Some of the pro-Nazis continued with their original views, and even undertook politically subversive activity, here and in Germany. Others, finding that their pre-war balance between patriotism and pro-Nazism had now tipped firmly on the side of patriotism, fully supported the war effort, while still maintaining their old views privately. Other people found that events had made them change their views sincerely. And then there were those who, frightened by the prospect of detention or disgrace, tried to hide or even to deny their former views by a variety of subterfuges, including attacking former colleagues. This wide variety of reactions sheds new light on the equally wide range of reasons for their original admiration for Nazism, and also gives us some more general insight into what could be termed 'the psychology of failure'.

Buy What Did You Do During the War? by Richard Griffiths from Australia's Online Independent Bookstore, BooksDirect.

Other Editions - What Did You Do During the War? by Richard Griffiths A Preview for this title is currently not available.
More Books By Richard Griffiths
View All