When the State Winks: The Performance of Jewish Conversion in Israel

Description - When the State Winks: The Performance of Jewish Conversion in Israel by Michal Kravel-Tovi

Religious conversion is often associated with ideals of religious sincerity. But in a society in which religious belonging is entangled with ethnonational citizenship and confers political privilege, a convert might well have multilayered motives. Over the last two decades, mass non-Jewish immigration to Israel, especially from the former Soviet Union, has sparked heated debates over the Jewish state's conversion policy and intensified suspicion of converts' sincerity. When the State Winks carefully traces the performance of state-endorsed Orthodox conversion to highlight the collaborative labor that goes into the making of the Israeli state and its Jewish citizens.

In a rich ethnographic narrative based on fieldwork in conversion schools, rabbinic courts, and ritual bathhouses, Michal Kravel-Tovi follows conversion candidates-mostly secular young women from a former Soviet background-and state conversion agents, mostly religious Zionists caught between the contradictory demands of their nationalist and religious commitments. She complicates the popular perception that conversion is a "wink-wink" relationship in which both sides agree to treat the converts' pretenses of observance as real. Instead, she demonstrates how their interdependent performances blur any clear boundary between sincere and empty conversions. Alongside detailed ethnography, When the State Winks develops new ways to think about the complex connection between religious conversion and the nation-state. Kravel-Tovi emphasizes how state power and morality is managed through "winking"-the subtle exchanges and performances that animate everyday institutional encounters between state and citizen. In a country marked by tension between official religiosity and a predominantly secular Jewish population, winking permits the state to save its Jewish face.

Buy When the State Winks: The Performance of Jewish Conversion in Israel by Michal Kravel-Tovi from Australia's Online Independent Bookstore, BooksDirect.

Other Editions - When the State Winks: The Performance of Jewish Conversion in Israel by Michal Kravel-Tovi 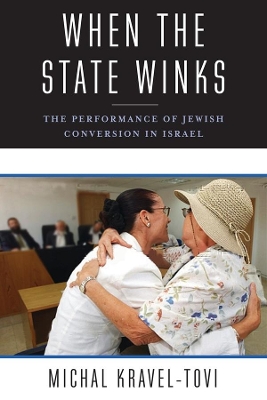