Why Are There Still Creationists?: Human Evolution and the Ancestors

Description - Why Are There Still Creationists?: Human Evolution and the Ancestors by Jonathan Marks

The evidence for the ancestry of the human species among the apes is overwhelming. But the facts are never "just" facts. Human evolution has always been a value-laden scientific theory and, as anthropology makes clear, the ancestors are always sacred. They may be ghosts, or corpses, or fossils, or a naked couple in a garden, but the idea that you are part of a lineage is a powerful and universal one. Meaning and morals are at play, which most certainly transcend science and its quest for maximum accuracy.

With clarity and wit, Jonathan Marks shows that the creation/evolution debate is not science versus religion. After all, modern anti-evolutionists reject humanistic scholarship about the Bible even more fundamentally than they reject the science of our simian ancestry. Widening horizons on both sides of the debate, Marks makes clear that creationism is a theological, not a scientific, debate and that thinking perceptively about values and meanings should not be an alternative to thinking about science - it should be a key part of it.

Buy Why Are There Still Creationists?: Human Evolution and the Ancestors by Jonathan Marks from Australia's Online Independent Bookstore, BooksDirect.

Other Editions - Why Are There Still Creationists?: Human Evolution and the Ancestors by Jonathan Marks 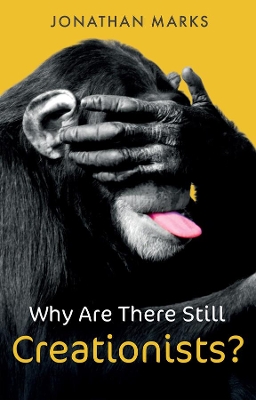 A Preview for this title is currently not available.
More Books By Jonathan Marks
View All