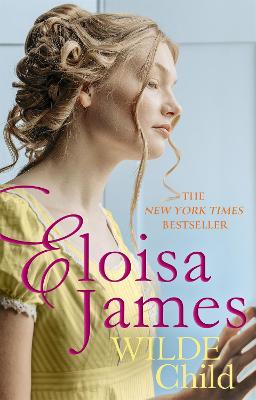 'Nothing gets me to a bookstore faster than Eloisa James' Julia Quinn The latest glittering, witty Regency romance from New York Times bestselling author Eloisa James . . . He wants a prim and proper duchess, not the Wildest of the Wildes!Already notorious for the golden hair that proves her mother's infidelity, Lady Joan can't seem to avoid scandals, but her latest escapade may finally ruin her: she's determined to perform the title role of a prince-in breeches, naturally.She has the perfect model in mind: Thaddeus Erskine Shaw, Viscount Greywick, a man who scorned the very idea of marrying her.Not that Joan would want such a dubious honour, of course.For years, Thaddeus has avoided the one Wilde who shakes his composure, but he's horrified when he grasps the danger Joan's putting herself in. Determined to keep her safe, he strikes a bargain: after one performance, the lady must return to her father's castle and marry one of three gentlemen whom he deems acceptable.Not including him, of course...Perfect for fans of Julia Quinn's Bridgertons and Eloisa's Desperate Duchesses The Wildes of Lindow Castle series:Wilde in LoveToo Wilde to WedBorn to Be WildeSay No to the DukePraise for Eloisa James: 'Eloisa James is extraordinary' Lisa Kleypas'Smart heroines, sensual heroes, witty repartee and a penchant for delicious romance have made James a fan favorite . . . readers will be hooked from beginning to end' RT Book Reviews'Romance writing does not get much better than this' People'Eloisa James writes with a captivating blend of charm, style, and grace that never fails to leave the reader sighing and smiling and falling in love' Julia Quinn'Charming, romantic and unexpectedly funny' Kirkus

A Preview for this title is currently not available.
More Books By Eloisa James
View All