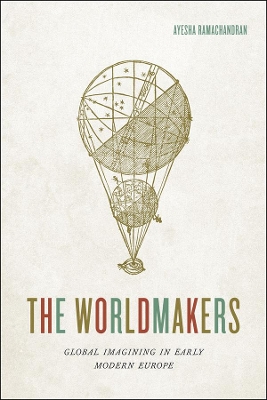 Description - The Worldmakers by Ayesha Ramachandran

In this beautifully conceived book, Ayesha Ramachandran reconstructs the imaginative struggles of early modern artists, philosophers, and writers to make sense of something that we take for granted: the world, imagined as a whole. Once a new, exciting, and frightening concept, "the world" was transformed in the sixteenth and seventeenth centuries. But how could one envision something that no one had ever seen in its totality?

The Worldmakers moves beyond histories of globalization to explore how "the world" itself-variously understood as an object of inquiry, a comprehensive category, and a system of order-was self-consciously shaped by human agents. Gathering an international cast of characters, from Dutch cartographers and French philosophers to Portuguese and English poets, Ramachandran describes a history of firsts: the first world atlas, the first global epic, the first modern attempt to develop a systematic natural philosophy-all part of an effort by early modern thinkers to capture "the world" on the page.

Other Editions - The Worldmakers by Ayesha Ramachandran A Preview for this title is currently not available.
More Books By Ayesha Ramachandran
View All