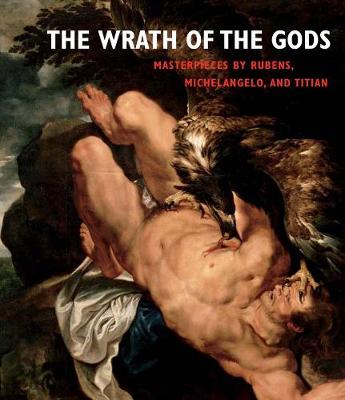 The Wrath of the Gods

Masterpieces by Rubens, Michelangelo, and Titian

Description - The Wrath of the Gods by Christopher Atkins

Peter Paul Rubens (1577-1640) proudly described his monumental painting Prometheus Bound as first among "the flower of my stock." This singular work demonstrates how Rubens engaged with and responded to his predecessors Michelangelo and Titian, with whom he shared an interest in depictions of physical torment. The Wrath of the Gods offers an in-depth case study of the Flemish artist's creative process and aesthetic, while also demonstrating why this particular painting has appealed to viewers over time.

Many scholars have elaborated on Rubens's affinity for Titian, but his connection to Michelangelo has received far less attention. This study presents a new interpretation of Prometheus Bound, showing how Rubens created parallels between the pagan hero Prometheus and Michelangelo's Risen Christ from the Sistine Chapel's Last Judgment. Christopher D. M. Atkins expands our understanding of artistic transmission by elucidating how Rubens synthesized the works he saw in Italy, Spain, and his native Antwerp, and how Prometheus Bound in turn influenced Dutch, Flemish, and Italian artists. By emulating Rubens's composition, these artists circulated it throughout Europe, broadening its influence from his day to ours.

Buy The Wrath of the Gods by Christopher Atkins from Australia's Online Independent Bookstore, BooksDirect.

A Preview for this title is currently not available.
More Books By Christopher Atkins
View All