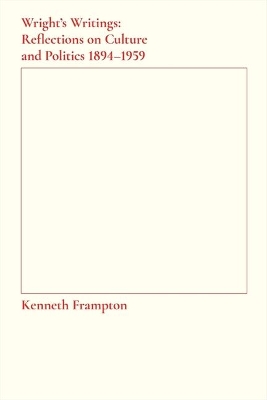 Wright's Writings traces the discursive work of Frank Lloyd Wright through a set of essays by Kenneth Frampton. Originally written as a series of introductions to the five-volume collection of Wright's writing published in 1992, the essays are gathered here as a critical survey of the architect's written and spoken work-a body of text that testifies to Wright's staggering prolificacy, pleasure in argument, diversity of interests, and desire to engage with timely political debates. Alongside these five essays, Wright's Writings provides a visual record of Wright's literary output, demonstrating the range of media he employed in the act of making architecture. Read together, it presents a history of the architect through the essays, books, letters, lectures, and speeches he wrote as well as the material and social cultures he navigated.

A Preview for this title is currently not available.
More Books By Kenneth Frampton
View All