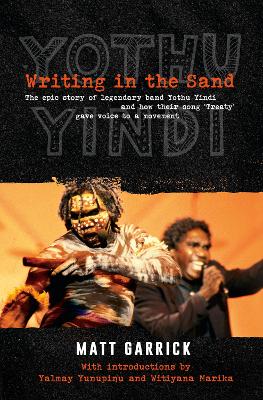 Writing in the Sand

Description - Writing in the Sand by Matt Garrick

The epic story of legendary band Yothu Yindi and 'Treaty', the song that gave voice to a movement

Sometimes a musical revolution can erupt from the most unlikely of places. Long before they were ARIA Hall of Fame inductees, Yothu Yindi were a bunch of Yolngu (Aboriginal people of East Arnhem Land) and balanda (non-Indigenous) mates rocking out in the remote Top End. Soon they were creating some of the coolest new music in the country, splicing traditional sounds with electric, and spreading a message of unity.

Then, after singer Mandawuy Yunupiu penned the hit song 'Treaty' with Paul Kelly and Peter Garrett, and a remix dropped in 1991, Yothu Yindi shot out of Arnhem Land and into the hearts of music lovers across Australia and the world.

Writing in the Sand, by Yothu Yindi's authorised biographer, Matt Garrick, is the epic story of one of Australia's most original bands and how 'Treaty' gave voice to Indigenous Australia's hard-fought struggle for recognition. Featuring photos from the band's archives never previously published, the book is based on extensive interviews with current and former band members, including mainstays Witiyana Marika, Stu Kellaway and Jodie Cockatoo, as well as family members such as Yalmay Yunupiu, Mandawuy's widow, and collaborators and fellow artists like Garrett, Kelly, Neil Finn, Joy McKean, Bart Willoughby and Andrew Farriss.

Funny, poetic, heartfelt and steeped in the sights, smells and unique rhythms of East Arnhem Land, Writing in the Sand is a must-read for anyone who cares about Australian music, and Aboriginal culture and recognition, all of which were brilliantly woven together by one of the most exciting bands of our time.