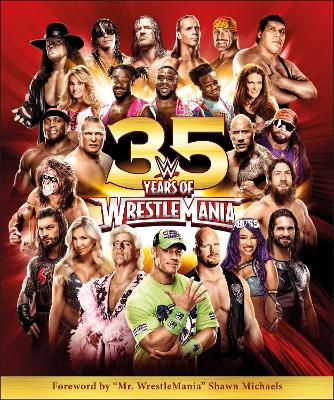 The complete history to the greatest WWE wrestling event on the planet.

This new edition of the fan-favourite, best-selling title 30 Years of WrestleMania(pub. 2014) brings the story of the biggest event in the WWE calendar bang up to date with 32 pages of brand-new content. Ever since the first ever WrestleMania, in March 1985, this annual, week-long, sold-out event has attracted hundreds of thousands of sports entertainment fans from all over the world. WrestleMania is where every WWE Superstar wants to make his or her name. WWE Champions such as John Cena, Ronda Rousey, Rey Mysterio, Hulk Hogan, The Rock, Shawn Michaels, Trish Stratus, and Lita have all found WrestleMania the perfect showcase for their incredible talents.

35 Years of WrestleMania allows sports entertainment fans to relive, or discover, all the most exciting matches, celebrity appearances, and controversies in this premier event's storied history. The key, historic matches of every Wrestlemania are explored in depth. Spectacular full-colour photographs from WWE's own archive-many never seen before-superbly capture WrestleMania's unrivalled glamour, and many of the most action-packed, unforgettable moments, both in the ring and behind-the-scenes. Get ready for the greatest spectacle in sports entertainment!

Other Editions - WWE 35 Years of Wrestlemania by Brian Shields A Preview for this title is currently not available.
More Books By Brian Shields
View All