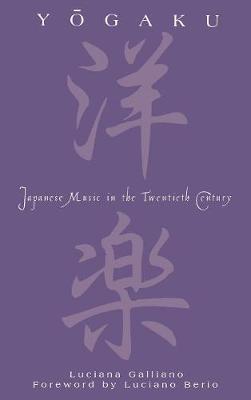 Japanese Music in the 20th Century

"This book introduces us to the world of contemporary Japanese music and it guides us towards a better understanding of their world."-Luciano Berio Yogaku discusses over a century of musical activity in Japan, detailing, in particular, the music that was inspired by Western music after the Meiji Restoration in the 19th century, and its development through the end of the 20th century. The book not only examines the infiltration of Western music into Japan, but also provides insight into the aesthetic and theoretical aspects of Japanese musical thought. The word yogaku (Western music) is made up of two characters:yo, which means "ocean" (that is, "over the ocean," meaning Western or foreign) andgaku, which means "music." Divided into two parts, the text covers the period preceding World War I as well as the post-war period. The introduction provides a history of music's role in Japanese society, touching upon the differences in the functions of Japanese and Western music. Part One describes the complex process of a new musical world and the European musical ideas that penetrated Japan. Modernization through westernization is explored; the author details the differences between the traditional Japanese music and that composed under Western influence, as well as the French and German impact on Japanese musical compositions. Galliano looks at the appearance of music in schools and the first Japanese musical compositions, as well as nationalism's effect on music through propaganda and censorship. Part Two explores topics such as the post-war avant-garde, the 1960s boom in traditional music, and the closing decades of the 20th century. The next generation of Japanese composers are also considered. Japanese history and music scholars, as well as those interested in Japanese music, will want to include Yogaku in their collection.

A Preview for this title is currently not available.
More Books By Luciana Galliano
View All