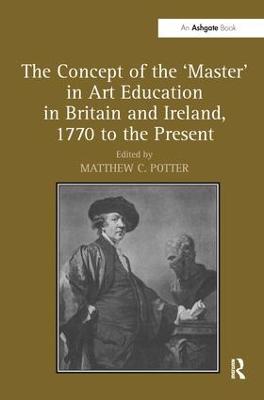 The Concept of the 'Master' in Art Education in Britain and Ireland, 1770 to the Present. Matthew Potter

Description - The Concept of the 'Master' in Art Education in Britain and Ireland, 1770 to the Present. Matthew Potter by Matthew C. Potter

A novel investigation into art pedagogy and constructions of national identities in Britain and Ireland, this collection explores the student-master relationship in case studies ranging chronologically from 1770 to 2013, and geographically over the national art schools of England, Ireland, Scotland and Wales. Essays explore the manner in which the Old Masters were deployed in education; fuelled the individual creativity of art teachers and students; were used as a rhetorical tool for promoting cultural projects in the core and periphery of the British Isles; and united as well as divided opinions in response to changing expectations in discourse on art and education. Case studies examined in this book include the sophisticated tradition of 'academic' inquiry of establishment figures, like Joshua Reynolds and Frederic Leighton, as well as examples of radical reform undertaken by key individuals in the history of art education, such as Edward Poynter and William Coldstream. The role of 'Modern Masters' (like William Orpen, Augustus John, Gwen John and Jeff Wall) is also discussed along with the need for students and teachers to master the realm of art theory in their studio-based learning environments, and the ultimate pedagogical repercussions of postmodern assaults on the academic bastions of the Old Masters.

Buy The Concept of the 'Master' in Art Education in Britain and Ireland, 1770 to the Present. Matthew Potter by Matthew C. Potter from Australia's Online Independent Bookstore, BooksDirect.

A Preview for this title is currently not available.
More Books By Matthew C. Potter
View All

Representing the Past in the Art of the Long Nineteenth Century: Historicism, Postmodernism, and Internationalism
Matthew C. Potter
Hardback , Sep '21
RRP: $252.00 $226.80