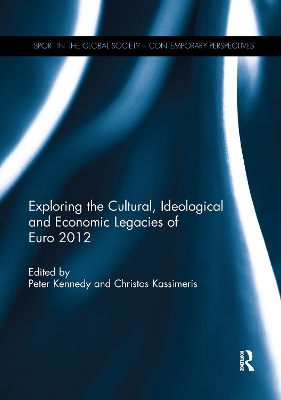 Exploring the cultural, ideological and economic legacies of Euro 2012

Description - Exploring the cultural, ideological and economic legacies of Euro 2012 by Peter Kennedy

European National football came together in the summer of 2012 for the 14th occasion. This book sets out to examine the enduring social tensions between supporters and authorities, as well as those between local, national and European identities, which formed the backdrop to the 14th staging of the European National football tournament, Euro2012. The context of the tournament was somewhat unique from those staged in previous years, being jointly hosted for the first time by two post-Communist nations still in the process of social and economic transition. In this respect, the decision to stage Euro 2012 in Poland and Ukraine bore its own material and symbolic legacies shaping the tournament: the unsettling of neo-liberal imaginings and emergent 'East-West' fears about poor infrastructure, inefficiencies and corruption jostled with moral panics about racism and fears surrounding the potentially unfulfilled consumerist expectations of west European supporters.

This book was published as a special issue of Soccer and Society.

Other Editions - Exploring the cultural, ideological and economic legacies of Euro 2012 by Peter Kennedy A Preview for this title is currently not available.
More Books By Peter Kennedy
View All