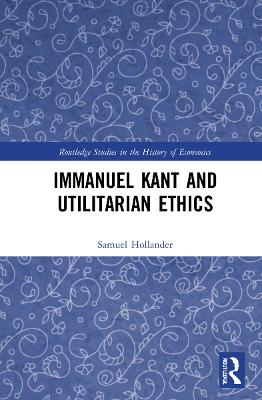 Adopting a view of utilitarian ethics in which motivation in the public interest takes on greater weight than is generally appreciated, this book explores the extent to which the philosophy of Immanuel Kant is consistent with this nuanced version of utilitarianism.

Kant's requirement that full ethical merit needs an agent to act purely 'from duty' to forward 'the universal end of happiness' rather than from a personal inclination to achieve that end clearly distinguishes his position from the version of utilitarian ethics adopted here. But this book also demonstrates, by reference to his formal ethical works and his lectures on ethics and anthropology, Kant's approval of a secondary category of conduct - conduct 'in conformity with' duty - entailing other-regarding or 'sympathetic' motivation to advance general happiness, differing from the utilitarian position only in its meriting a qualified degree of ethical credit. After comparing Kant with eighteenth-century utilitarian writers from Locke to Smith, and also with Bentham and Malthus, the book evaluates reactions to Kant by J.S. Mill and Karl Marx and proposes Michel de Montaigne (1533-1592) as a 'precursor' for maintaining a 'Kantian' doctrine of conduct 'from duty' and for other shared features. In terms of public policy, the work demonstrates Kant's justification of poor relief and reduced inequality, his proposal for a state education plan and his opposition to paternalism.

This book provides essential reading for academic specialists and students concerned with the interface of political economy and ethics, as well as the history of economic thought, history of political thought and intellectual history.

A Preview for this title is currently not available.
More Books By Samuel Hollander
View All