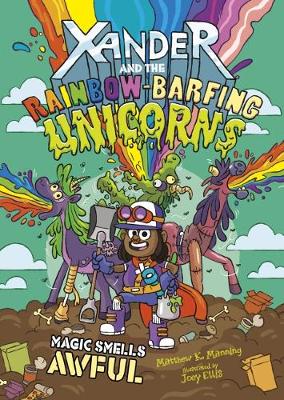 Twleve-year-old Xander first meets the Rainbow-Barfing Unicorns - stinky zombie-like creatures from the magical world of Pegasia. They've been banished to Earth for well being stinky zombie-like creatures. However Earth presents a new danger HUMANS. Luckily Xander vows to protect the unicorns at all costs.
Plump-full of grotesquely delightful characters and fantastical realms the adventures of Xander and his team of Rainbow-Barfing Unicorns are so epic they'll make you want to puke.