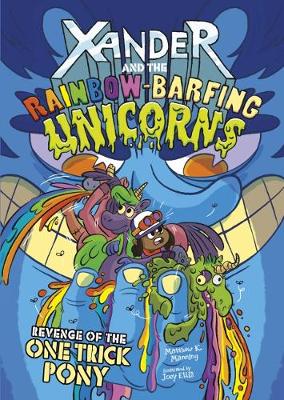 Revenge of the One-Trick Pony

Description - Revenge of the One-Trick Pony by Joey Ellis

Twelve-year-old Xander is the only person on Earth who knows about the Rainbow-Barfing Unicorns - except for a crazy billionaire who will stop at nothing to capture these zombie-like vomiting creatures. Can Xander protect them FYI The odds aren't great.
Plump-full of grotesquely delightful characters and fantastical realms the adventures of Xander and his team of Rainbow-Barfing Unicorns are so epic they'll make you want to puke.