The Battle of Le Hamel on 4 July 1918 was an Allied triumph, and strategically very important in the closing stages of WWI. A largely Australian force, commanded by the brilliant Sir John Monash, fought what has been described as the first modern battle - where infantry, tanks, artillery and planes operated together as a coordinated force.Monash planned every detail meticulously, with nothing left to chance. Integrated use of tanks, planes, infantry, wireless (and even carrier pigeons!) was the basis, and it went on from there, down to the details: everyone used the same maps, with updated versions delivered by motorbike despatch riders to senior commanders, including Monash. Each infantry battalion was allocated to a tank group, and they advanced together. Supplies and ammunition were dropped as needed from planes. The losses were relatively few. In the words of Monash: 'A perfected modern battle plan is like nothing so much as a score for an orchestral composition, where the various arms and units are the instruments, and the tasks they perform are their respective musical phrases.'Monash planned for the battle to last for 90 minutes - in the end it went for 93. What happened in those minutes changed for the rest of the war the way the British fought battles, and the tactics and strategies used by the Allies.Peter FitzSimons brings this Allied triumph to life, and tells this magnificent story as it should be told. 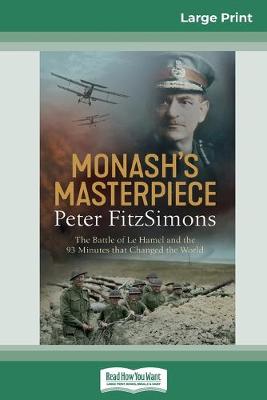 Journeys to the Other Side of the World
Sir David Attenborough
Hardback , Sep '18
RRP: $0.00 $0.00
More Books By Peter FitzSimons
View All