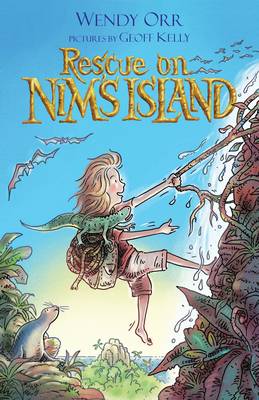 Nim lives on an island with her father, Jack, a marine iguana called Fred, a sea lion called Selkie, and their friend Alex Rover, the adventure writer. Nim's island is the most beautiful place in the world, and she wouldn't swap live anywhere else.

When Jack invites a group of scientists to visit, they bring their children as well. But two of the scientists have plans other than studying algae. By the time Nim discovers what they really want, and what they will do to get it, the children are in grave danger. And so is the island! Nim must choose between saving a natural treasure and saving someone's life.

Other Editions - Rescue on Nim's Island by Wendy Orr