A Rose for the Anzac Boys

Description - A Rose for the Anzac Boys by Jackie French

The 'War to end all Wars', as seen through the eyes of three young women

War is being fought on a horrific scale in the trenches of France, but it might as well be a world away from sixteen-year-old New Zealander Midge Macpherson, at school in England learning to be a young lady. But the war is coming closer: Midge's brothers are in the army, and her twin, Tim, is listed as 'missing' in the devastating defeat of the Anzac forces at Gallipoli .

Desperate to do their bit - and avoid the boredom of school and the restrictions of Society - Midge and her friends Ethel and Anne start a canteen in France, caring for the endless flow of wounded soldiers returning from the front. Midge, recruited by the over-stretched ambulance service, is thrust into carnage and scenes of courage she could never have imagined.

And when the war is over, all three girls - and their Anzac boys - discover that even going 'home' can be both strange and wonderful. Exhaustively researched but written with the lightest of touches, this is Jackie French at her very best.

'A book of many voices. Poignant, graphic and compulsive fiction about women who volunteered during WWI' - Sunday Age

'Beautifully written. An important story. The use of a sixteen year old protagonist will make the story more real and more confronting for teen readers' - Aussie Reviews

'A well-researched story about the invaluable support women provided during the war. Recommended for secondary school-aged children' - Australian Bookseller and Publisher

'... rousing stuff, and it hasn't been watered down. French doesn't shy away from the nightmarish conditions of trench warfare. Highly readable, scrupulous in its history ... an ideal text for schools' - Sydney Morning Herald

'This is a moving story about the love, kindness and humanity of the people involved in the bloodshed and carnage of World War I' - Launceston Examiner

Buy A Rose for the Anzac Boys by Jackie French from Australia's Online Independent Bookstore, BooksDirect.

Other Editions - A Rose for the Anzac Boys by Jackie French 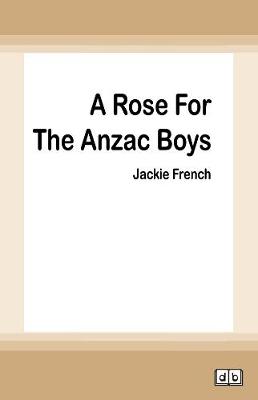