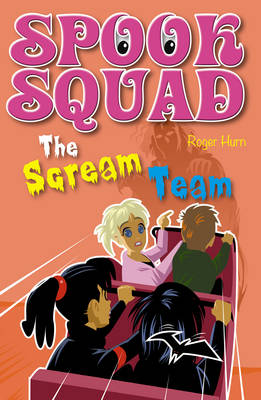 It's all the fun of the fair when the Spook Squad take on a Scream Team of werewolves spectres and skeletons in the Ghost Train ride. This bunch of bad guys from Otherworld is determined to turn the fun fair into a real life chamber of Horrors - and that is just so unfair. The question is can the Dream Team outwit the Scream Team Or is their roller coaster about to come to a dead end Roxy has a weird auntie. Her Auntie Rhee lives on Hangman's Hill in a spooky house called the Old Tower. The Old Tower looks like Dracula gave it a make-over. But Rhee isn't a vampire - she is a banshee. She's trying to protect humans from ghouls ghosts and long-legged beasties. But she can't do it on her own. That's why she needs the Spook Squad. The Spook Squad are Roxy Leena Nita and Emma and their poltergeist Rattle. These four girls are as bright and sparky as a fire in a fireworks factory. So on dark and stormy nights when the vampires are being a pain in the neck and hairy horrors are on the prowl the Spook Squad goes into action.