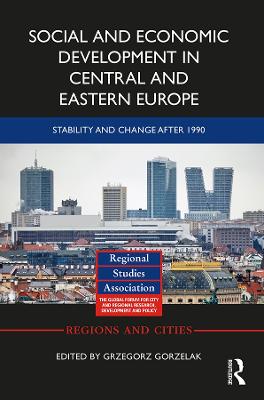 Social and Economic Development in Central and Eastern Europe: Stability and Change after 1990

Description - Social and Economic Development in Central and Eastern Europe: Stability and Change after 1990 by Grzegorz Gorzelak

The integration of post-socialist Central and Eastern Europe into the EU is one of the success stories of European development. The region has seen significant economic convergence, dramatic changes in socio-economic indicators and improvements in the natural environment. However, some challenges remain, such as political divergence, public governance issues and population demographics.

This book identifies and analyses the key post-1990 developments across the New Member States at the sub-national and national levels, with frequent country-level and regional comparisons. Careful attention is paid to drawing out commonalities in development trajectories while appreciating each country's unique context. Drawing on the academic literature and illuminating empirical material, the broad range of topics discussed in the book paints a detailed picture of both change and stability in Central and Eastern Europe.

It will be valuable reading for advanced students, researchers and policymakers in regional studies, European studies, human geography, political economy and transition economics.

Buy Social and Economic Development in Central and Eastern Europe: Stability and Change after 1990 by Grzegorz Gorzelak from Australia's Online Independent Bookstore, BooksDirect.

A Preview for this title is currently not available.
More Books By Grzegorz Gorzelak
View All