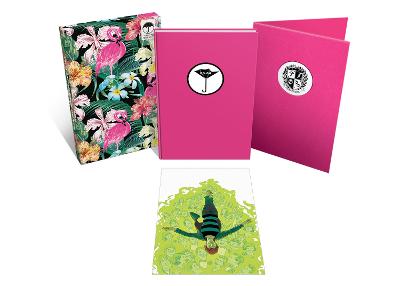 Tales From The Umbrella Academy: You Look Like Death (deluxe Edition)

Description - Tales From The Umbrella Academy: You Look Like Death (deluxe Edition) by Gerard Way

This oversized hardcover collects issues #1-#6 of You Look Like Death as well as a brand new eight-page Seance story (exclusive to the hardcover editions) an expanded sketchbook section, and a foreword by Robert Sheehan, portrayer of Klaus in the hit Netflix series!

The Deluxe format also includes a slipcase designed by Tony Ong and a portfolio containing an exclusive print by I.N.J. Culbard!

When 18-year-old Klaus gets himself kicked out of the Umbrella Academy and his allowance discontinued, he heads to a place where his ghoulish talents will be appreciated--Hollywood.

But after a magical high on a stash stolen from a vampire drug lord, Klaus needs help, and doesn't have his siblings there to save him.