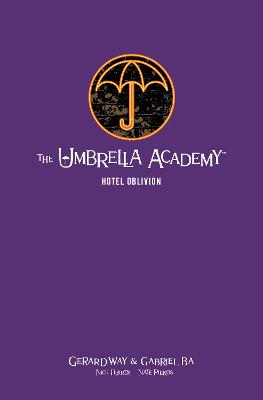 Check out the New York Times best selling comics series before the new season of Umbrella Academy debuts in 2020!

With a new Netflix show and a third comics series, the dysfunctional family of superheroes returned with a vengeance in 2019. Now that acclaimed series, Hotel Oblivion, gets an oversized hardcover treatment, with the complete 7-issue story, plus a greatly expanded sketchbook section.

Faced with an increasing number of lunatics with superpowers eager to fight his wunderkind brood, Sir Reginald Hargreeves developed the ultimate solution . . .

But their past is coming back to haunt them.