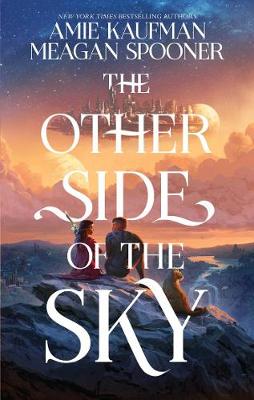 The Other Side of the Sky

Description - The Other Side of the Sky by Amie Kaufman

Two worlds, two hearts and a choice that will shape their fate forever.

Prince North's home is in the sky, in a gleaming city held aloft by intricate unknown technology. But North believes his sky island is sinking. Its engines are failing, and the key to saving his home is to venture to the place the engines were first created.

Nimh is the living goddess of her people on the surface, responsible for providing answers, direction - hope. But in the midst of the surface's worst crisis yet, a mist that spreads madness and poison, doubts have arisen among the people about Nimh's divinity. She must find a way to manifest her power - before she is overthrown, and all is lost.

North's and Nimh's lives are entwined - though their hearts can never be. Linked by a terrifying prophecy and caught between duty and fate, they must choose to either save their people, or succumb to the bond that is forbidden to them.

'A vivid and compulsive thriller set in a beautiful, perilous world of myths and treachery. You won't want to put it down.' Laini Taylor, New York Times bestselling author of the Daughter of Smoke and Bone series

Buy The Other Side of the Sky by Amie Kaufman from Australia's Online Independent Bookstore, BooksDirect.